Nostalgia: It ain’t what it used to be. 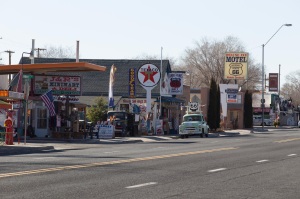 In writing Diamond-T it occurred to me that many of the most nostalgic people never had to live with the things they are nostalgic about, nor in the world that hosted those things.

This wasn’t a new revelation to me. I remember how much my dad loved McDonald’s. He had a thing for chain restaurants in general, but McDonald’s in particular. He had been a bandleader, and likely covered a million miles of America’s two-lanes going gig-to-gig back in the days before McDonalds. He and his bandmates ate plenty from the mom-and-pop diners that littered the roads at the time, and they still had the memories of ptomaine and salmonella and norovirus to show for it. The food in those roadside diners was usually just bad, as opposed to just sadly uniform. For my dad, McDonald’s was one of the high-points of modern America. It was an unquestionable advance for humanity. He laughed at the nostalgia for the roadside local diners.

So I started to think about the things it’s right for us to miss. What have we really left behind that should be recovered, and can be recovered without recreating a world we deliberately left behind? See, some of the “nice things” we occasionally miss were enabled only by things that weren’t so nice–like disregarding other people’s humanity, for instance.

Thus, I’ve narrowed the list down to only a few things. You are right to miss these things if you do, and if you’d like to experience them again, it can be achieved without changing the course of history.

1. Wristwatches. When i got my first pager back in the 1990s, I very quickly stopped wearing my wristwatch. That was a mistake. Sure, the pager kept time very accurately, and I was never without it. But somehow needing to pull it out of my pocket was an extra step sufficient to keep me from an awareness of the time. Also, the loss of the analog dial made time itself seem like even more of an abstraction than it already was. The same problems continued when I starting carrying a cell phone. I finally broke down about ten years ago and started wearing a wristwatch again. Now, I feel naked without one. Hopefully, the new smartwatch revolution will make wearing wristwatches cool again. But of course, they’re going to include some distracting non-time info, because that’s the point of a smartwatch.

2. Handwriting. It’s been suggested that handwriting is good for your brain. If that’s so, we’re in big, big trouble. I am starting to realize that handwriting imposes a mental discipline, but also liberates the writer in some way. I have a feeling it’s true what they say about how if all we had were computerized devices, someone would need to invent paper.

3. Paper books. I am half-afraid I’ll slit my own throat here considering how many of my sales come from e-readers. Nothing wrong with that at all. But in researching my next book, I’m hitting the old-style paper books — and hard. Sure, there are certain practical advantages (paper books don’t crash, the batteries never run out, waterspills can hurt them but not usually destroy them, etc.) but I also find there’s more of a chance to absorb meaning from paper. It might be because we see the stacks of paper on each side of the spine increasing or decreasing with progress. It might be the feeling of our fingers tracing across the page. It might just seem more real to us.

Anyway, these are the things familiar to our grandparents and great-grandparents that I think we can all safely continue to enjoy, or rediscover if necessary. Sometimes it’s right to be nostalgic.

Check out more of the wonderful, terrible world of the Fabulous 50’s in Eye of the Diamond-T available HERE.